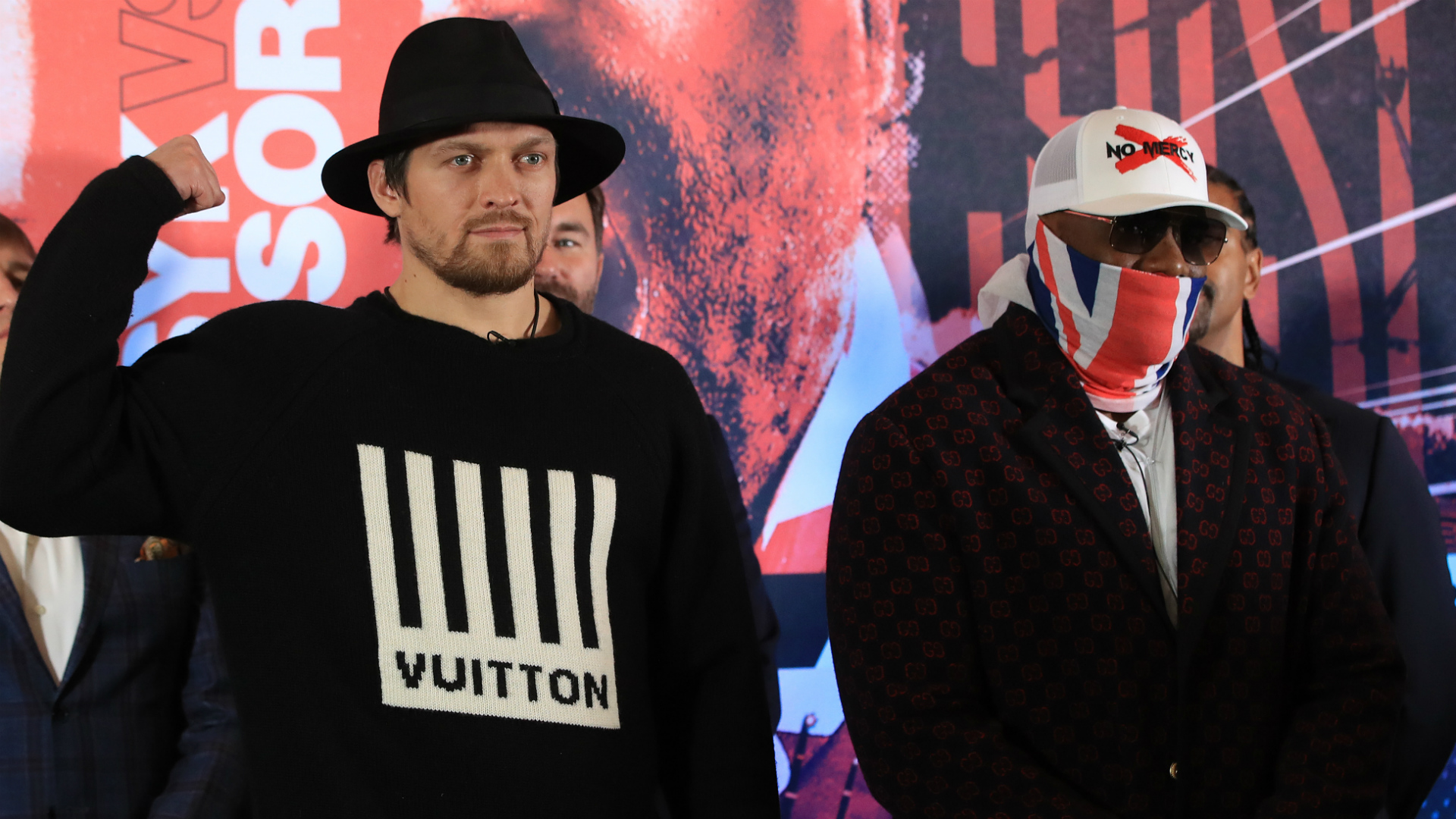 Dereck Chisora has made clear his intentions ahead of the heavyweight clash with Oleksandr Usyk, who will be aiming to make a statement to the rest of the division on Saturday.

An intriguing clash between contrasting styles was set to take place earlier in the year, only for the coronavirus pandemic to force a delay. Now, however, the stage is set, Wembley Arena the venue for a fight that should prove to be worth the wait.

Usyk — already sitting as the mandatory challenger to WBO champion Anthony Joshua — built his reputation in the pro game at cruiserweight, becoming the undisputed champion in the division. He has fought just once since opting to step up in weight, recording a seventh-round stoppage against Chazz Witherspoon over a year ago.

Chisora — set for a 42nd fight in a career that has seen him share a ring with Tyson Fury (twice), David Haye and Vitali Klitschko, among many others — will pose a different challenge.

The 36-year-old has acknowledged he cannot possibly hope to outbox an opponent who, during his amateur career, won a gold medal at the 2012 Olympic Games. Instead, his plan is to try to drag Usyk into deep waters, with the aim of finding out if can swim against the tide.

If that was not already made clear enough in a build-up that has seen the pair hilariously jabbing at each other on social media, Chisora made it absolutely obvious by painting “WAR” on his chest for the weigh-in, all part of a Halloween makeover for a bout that will take place on Oct. 31.

“I would rather him knock me out than me do nothing,” Chisora told Sky Sports on Friday after the final head-to-head media opportunity before the main event. “Either I will knock him out or he will quit on his stool. That’s what we’re going for.

“I’m fit and you are going to be very surprised at what happens in the ring.”

Usyk also caught the eye at the weigh-in, coming in at a career-heaviest 216 pounds. It was 27 pounds lighter than what Chisora hit on the scales, but that was to be expected.

So, too, is the script for main event. Chisora’s plan is obvious — Usyk must find a way to not just cope with the continued pressure, but also effectively counter it. In terms of their methods, these two are at the opposite ends of the boxing spectrum, yet mixing them together should make for quite the spectacle, even without fans present.

The pair have already provided entertainment with their online interactions and prefight meetings — now expect fireworks when it gets down to the serious business.

Usyk has an unblemished 17-fight record in the pros following a distinguished amateur career.

Tony Bellew promised to “get the monster” when he fought Usyk at cruiserweight in November 2018. Instead, he was stopped in the eighth, joining a notable list of names in the division to lose to the 33-year-old that also Murat Gassiev, Mairis Briedis and Marco Huck.

His pedigree should not be doubted, but Usyk does still need to prove he can cope following the shift to the heavyweight ranks.

Chisora is on a three-fight winning streak, his most recent success seeing him stop fellow Brit David Price inside four rounds. There was a spectacular knockout of Artur Szpilka prior to that, while he also found a way to defeat the durable Carlos Takam inside the distance.

Both clashes with Dillian Whyte were outstanding to watch but saw him come out on the wrong side of the result, while he also lost via points to Kubrat Pulev in 2016. Will Chisora continue to be the gallant loser, or could this be a statement win that lands him a title chance?

Tale of the tape

Lee Selby and George Kambosos Jr. are the chief support, the lightweight duo meeting in an eliminator for the IBF title held by Teofimo Lopez.

Australian Kambosos has an 18-0 record heading into the contest, while Selby is a former world champion at featherweight hoping to make waves now he has moved up.

Also in action, Savannah Marshall and Hannah Rankin meet with the vacant WBO middleweight belt up for grabs.

The pair were due to face each other on Oct. 17, only to be called off when Peter Fury — Marshall’s trainer — tested positive for the coronavirus. Thankfully, there has not been a long delay in finding a new date.

Popular heavyweight David Allen was due to be in action on the bill, only for a fight with Christopher Lovejoy to be called off at the last minute. Originally, Christian Hammer had been due to be Allen’s opponent, but he was forced to withdraw because of COVID-19.

What the fighters have to say

Usyk on moving to the heavyweight division: “If the king of animals would be considered according to the size, then it would be elephant, not the lion. An elephant is a friend of the mouse!”

Chisora on the task he faces: “I need a fair referee. I want this fight to be fair. I don’t want to be dancing or wrestling. I want both of us to work fairly. I have to keep marching forwards. He will try to wrong-foot me but I’m ready.”

David Haye, Chisora’s promoter: “It will get very rough, very fast. Will Usyk drown in the heavyweight waters? Chisora can absorb a disgusting amount of punishment. How deep can Usyk soul-search? How much does he want it? Things come easier to Usyk. I see Chisora causing one of the biggest upsets on British soil ever.”

Anthony Joshua to Sky Sports on Usyk: “Sometimes I know to sit down on my feet and hurt someone. You’ve got to let them know that you’re there because all that pitty-patty stuff after 12 rounds? Sometimes people don’t respect that type of power.”